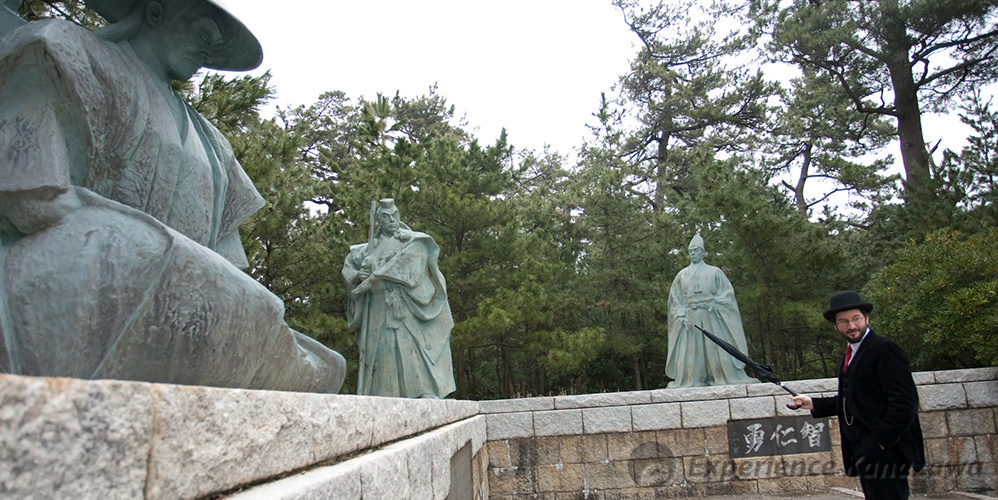 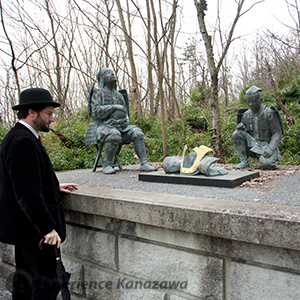 Bashô had left Kanazawa at the end of summer, heading south to Echizen Province, the northern part of nowadays coastal Fukui prefecture. On his way, he and his companion had started to catch brief glimpses of the changing season, harbingers of new haikus to come.

Redly, redly
The sun shines heartlessly but
The wind is autumnal

They arrived around Komatsu in the beginning of September, undoubtedly one of the best seasons to appreciate the lush natural sceneries of Japan. Interestingly, the Komatsu area is nowadays very famous among Japanese for the autumnal bright shades of its maple trees. However at the time when Bashô visited it, the region was mostly famous for the uncommon shapes of pine trees which gave their name to the city of Komatsu (meaning little pine in Japanese), and in honour of which Bashô wrote a haiku:

The charming name’s origin is still discussed today. It is however commonly believed that the retired Emperor Kazan, on his pilgrimage through the Hokuriku region, planted a pine sapling in the area, which grew enough for the place to be mentioned in ancient historical writings as Sono no Komatsubara, meaning “small pine trees field garden”.

Many natural sites in Komatsu celebrate the pine tree along with other gracefully assorted companions such as the cherry trees, whose blossoming overwhelm the beautifully designed Rojô park in April. This nice garden was built in 1906, on the ground where the third lord of Maeda had built his castle. 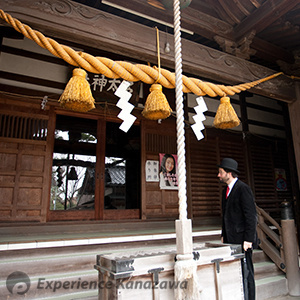 Walking a few miles on the west, the Ataka barrier, were travelers had to show their pass to go further and enter the Daishoji domain, recalls a well known historical episode of the Genpei war which opposed the Minamoto and Taïra clans, competing for the control of the imperial throne at the end of the 12th century. At the height of intestine conflicts inside a Minamoto clan taking advantage on their enemies, a highly revered warrior in Japanese culture, Minamoto Yoshitsune and his right-hand man Benkei, managed by their courage to get leniency from the gateman Togashi Saemon, who decides to cover up their escape.
This episode, originally adapted in a 15th century Noh play would subsequently inspire a very famous Kabuki play and a movie from Akira Kurosawa. Nowadays, a commemorating monument, surrounded by a beautiful pine trees forest, stands on the top of a hill, overhanging the Japan Sea.
Not more than for the Kurikara Toge pass, did Bashô evoke this epic moment of Japanese history. But he did retain another, whose tragic inanity matched his poetic feelings. Going to worship at the Tada Shrine, Bashô admired there the helmet and the brocade robe of Saitô Sanemori, still displayed nowadays. 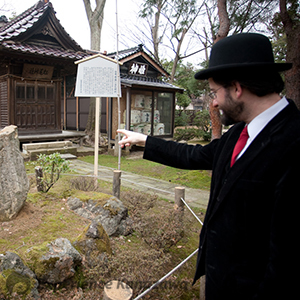 Said to have been built in the 6th century, the Tada Shrine is one of the oldest of Japan. Sanemori, a valiant samurai, had served the Minamoto clan before joining the Taïra, after the assassination of Minamoto Yoshitomo in 1160.
With theGenpei war breaking out some 20 years later, the old Sanemori was killed during the battle of Shinohara, on the other side of what is now the Katayamazu Lake by Minamoto Yoshinaka, to whom he had been a tutor during his childhood. Taking the helmet from his beheaded vanquished, he brought the macabre trophy to the nearby Tada Shrine, eventually joining his tears to prayers for victory.

Alas for Mortality
Underneath the helmet
A grasshoper

The shining young general of the Minamoto clan, winner of the Kurikara Toge pass battle would be defeated in turn, and killed under orders of his cousins. Was this episode conveying to him the very sense of the existence’s piteous inanity? A few years later, crippled by the many roads he went on to search for inspiration, Matsuo Bashô expressed the desire of sharing Yoshinaka’s broken dreams. Fulfilling his last wishes, he lays buried next to Yoshinaka’s grave in Gichû-ji Temple, making of Shiga prefecture’s Otsu city, a place of pilgrimage for both lovers of Japanese history and poetry.