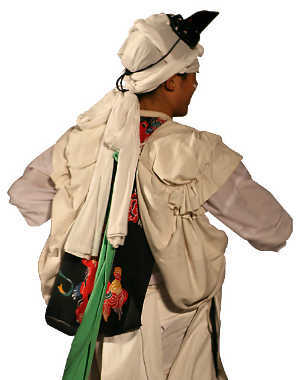 The Revival of the Mysterious Dance!

If once you see it, it will fascinate you. Dengaku is a traditional dance performance brought into being around the Heian Period (794-1185). The origin is still unknown. Some say it was started as a ritual dance for good harvest when they plant rice, others deny its Japanese origin. Although sadly the dance had almost been forgotten, a renowned Kyogen (traditional comical theater) performer newly directed it in modern times. The mysterious dance was finally revived here in Kaga city as well! It's called "Dai-Dengaku" which literally means a "big dengaku". Yamashiro Onsen is well-known as a superb spa town with excellent resort ryokan. There is a legend that the hot spring was found in 725 by a holy crow with "three" feet. The local people call the crow Yata-Garasu. Now they dedicate their Dengaku dance to the legendary creature.

Place: Yamashiro Onsen spa town (Yunogawa: 2-1, Banshoen-Dohri street)
Date: the last weekend of July, or the first weekend of August; (20:00 - 21:30)
How to get to Ushitsu District: Take the CAN Bus "Komatsu Airport Line (from Komatsu Airport to JR Kaga-Onsen Station)" and "Yamamawari Line (from JR Kaga-Onsen Station to Yamashiro Onsen spa town)" 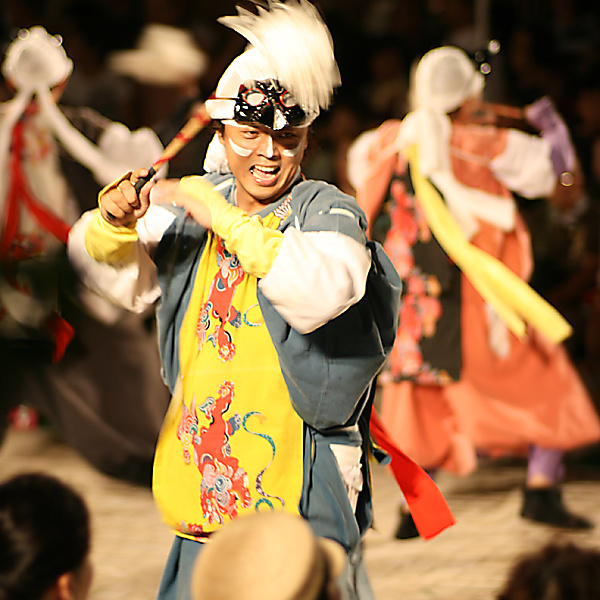 To the fabulous spa town before the night falls!

It was just because one of the Yamashiro people recommended me to watch the dance. On the second day of the event, we decided to go to the spa town to see the mysterious dance, Daidengaku. I didn't learn anything about the dance before leaving Kanazawa. Does it have its long history? What's so special? Only one thing I made sure was how to get there and where to park our ride.
We followed a staff at the free parking lot, then transfered to a free shuttle bus there. I knew we were bit late, and the dance was already started on the street in the heart of the spa town. The stage was lightened up, and people in bizarre costumes were hopping. Some were grabbing bamboo twigs. - I recently found out they were the dancers who disguised as crows. - "Wow! I have never seen those dances!" The typical festivals in Ishikawa, which have their long histories, are mostly at fishing villages along the coast, but those are not dancing. The story about the legend in this spa town is significantly choreographed by the renowned Kyogen performer. It's very fascinating and will make you feel hilarious.

The rhythm, the flute sound, and the echo of drums!


We have a Bon festival dance anywhere in Japan, but sadly most of the music don't interest the youth in modern times. Daidengaku music is different. It's fun, quick and rhythmical. There is something to enhance people's feeling in the rhythm, and something to let them set free. When I first saw the dance, it reminded me Bollywood movies. Indian people have passion for dance as you know. The choreography with basic steps doesn't look so difficult, like hop and hop. However some acrobatic movements and juggling are also taken in. Let's leave the parts to the Yamashiro dancers and enjoy watching them!
I especially loved the dancers with big smiles. They made my day. Of course they performed for audiences, but also for themselves. All dancers seemed to enjoy themselves dancing. 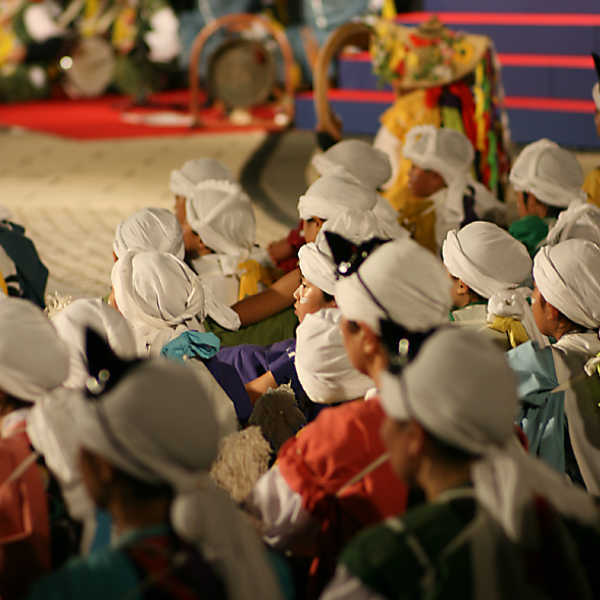 Their magnificent costumes are also must-see!

For the show along legendary lines about the spa town, some of the roles are wearing crow masks. Others are wearing straw hats decorated with colorful flowers. 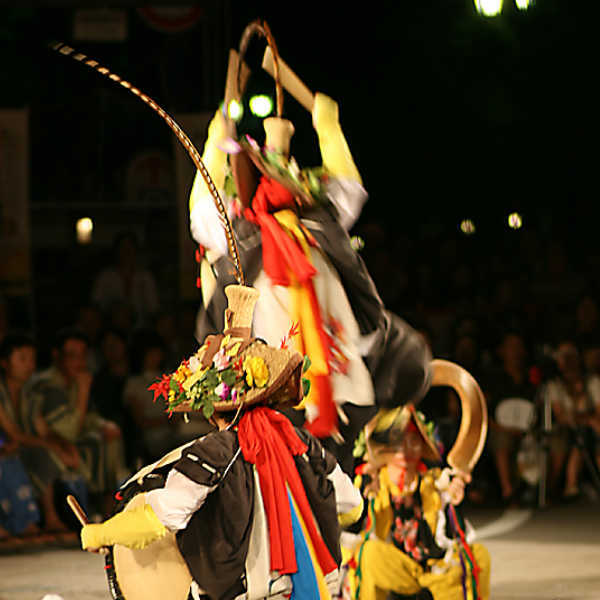 Yoh-ko (shoulder drums), binzasara (bamboo whisks) and doh-byo-shi (cymbals) are not just instruments but also parts of costumes. I have no idea if people of old times put those costumes on for Dengaku. However you'll at least see something from the Heian Period in the costume. The mysterious Dengaku dance is considered to be created in the age.
It's recorded in a Japanese old literature, Rakuyo Dengakuki, that in 1096 there was a massive epidemic of Dengaku in Kyoto. Although the dance had been for the common people once, it eventually fascinated the nobility and even the Imperial family at the days. It says the retired emperor let his vassals be in gaudy costumes to hold a Dengaku performance for the Imperial princess. She was a big fan of Dengaku. It was in the July, and then in the following month, the princess suddenly passed away. The retired emperor got a shock and became a priest. The common people were automatically forced to refrain from fun events. Since then their enthusiasm about the dance was steadily declining and it was almost forgotten.
Yamashiro Daidengaku is held every summer. Let's go see why the Heian people were so excited about the dance! 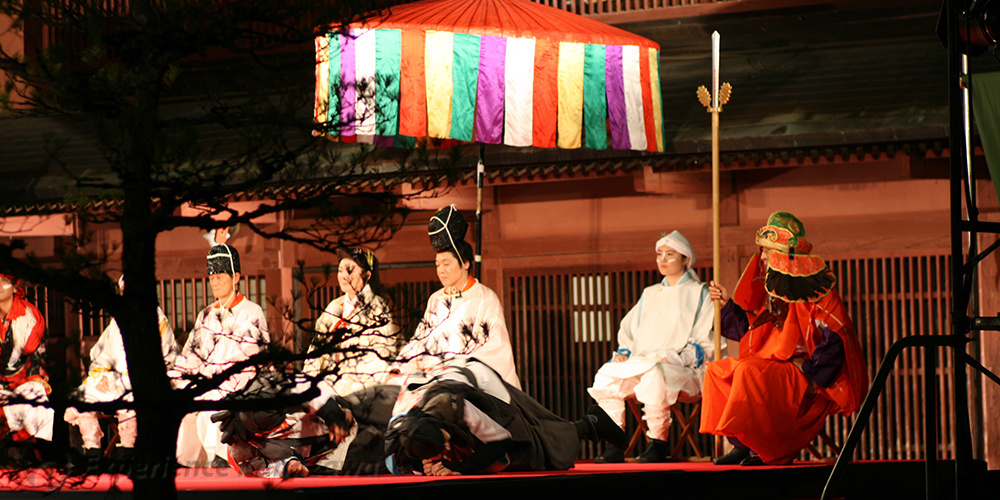