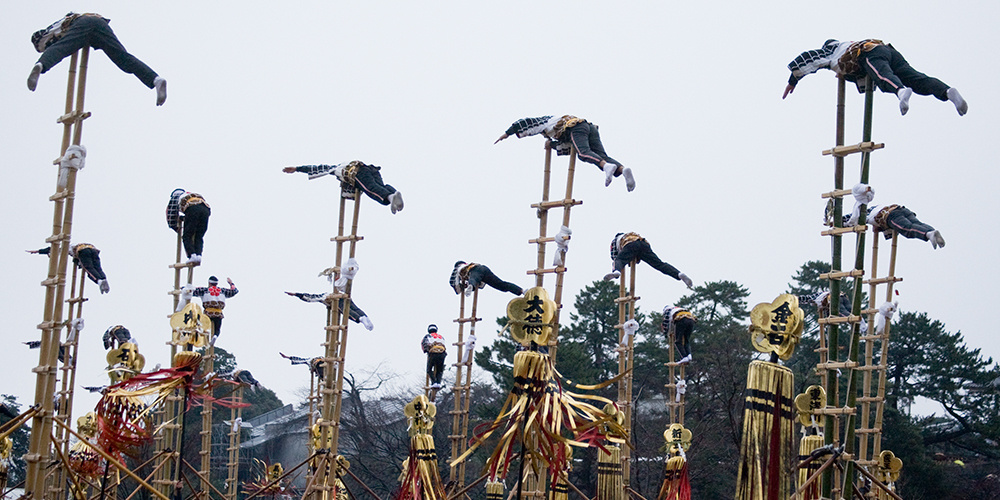 The Kaga-Tobi were a group of firefighters working for the Kaga lords during the Edo period. They climbed ladders to put out fires as quickly as possible. This tradition continues with Kanazawa's own highly skilled firefighters, who perform death-defying feats from 6-meter-ladders in order to celebrate the New Year.

This performance in Kanazawa started at the beginning of the Meiji period. I went to Kanazawa-Jo Castle Park on the second Sunday of the year to watch the renowned performance. We had sleet at 10 AM on that day, and it was freezing as you can imagine! I could see that more than 20 fire trucks were already lined up in a row. After a ceremony to commend the firefighters who received honors, the Kaga-Tobi members in Happi coats started to prepare the bamboo ladders. Woah! Where did all these

ladders and firefighters come from? Kanazawa city is definitely well-prepared!
Although I didn’t keep count, I think four people held onto one ladder, while, another one climbed up to the top rung. Then, the music started! Firefighters were moving all over the place while balancing the ladders. I tried to imagine if I was the one on the top of one of the ladders. Yikes! I can’t even think about it! 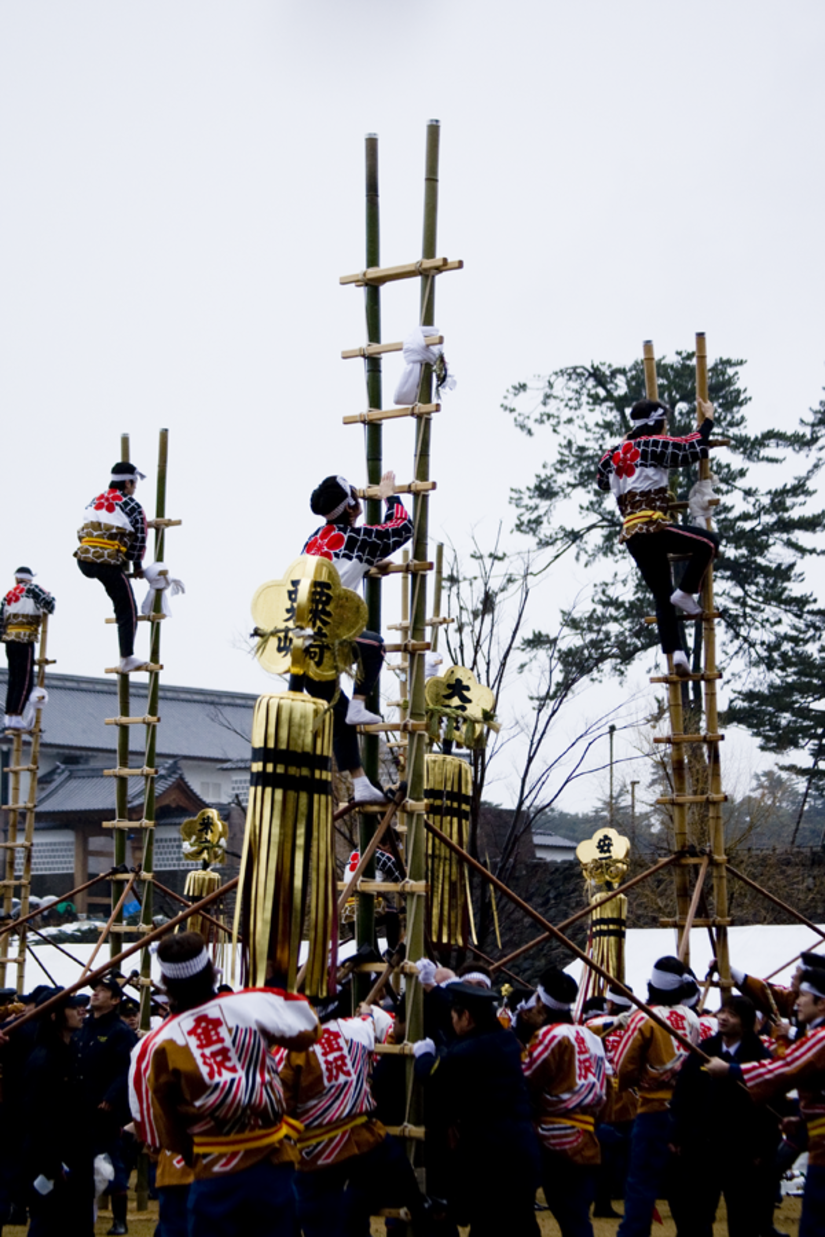 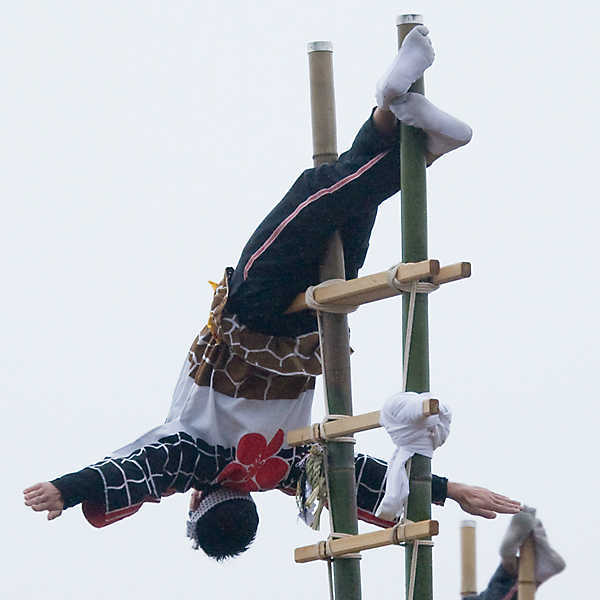 The golden Matoi flag was flapping by the ladders. It’s an object used to notify people where a fire is, and also to identify which firefighter team arrived first. I hear that the old firefighters were quite gallant and competitive during the Edo period. They dashed to the fire immediately and put up the Matoi flag with their team name.
It was a great honor to have their name shown, and it must have been quite the competition for ordinaries to watch! That’s because the Kaga-Tobi are still proud of the old firefighters, inheriting their techniques and contributing their performance as per tradition. 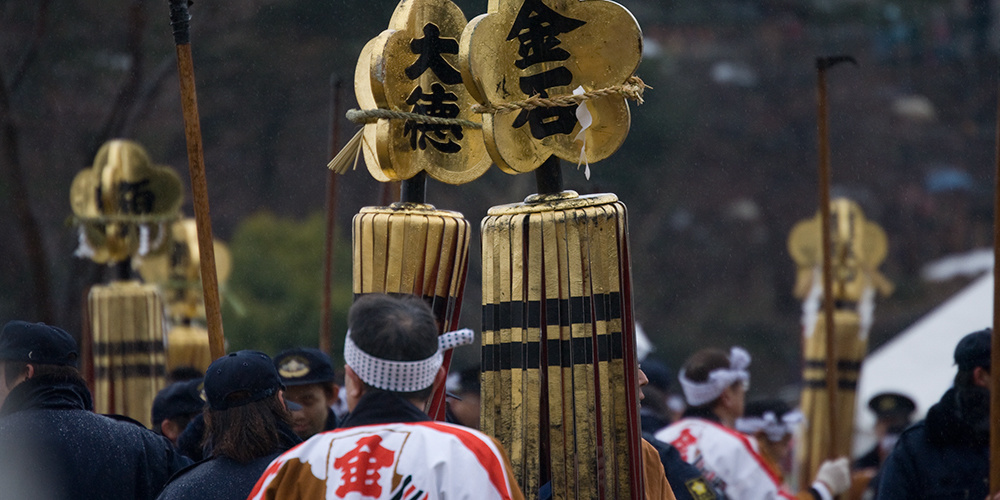 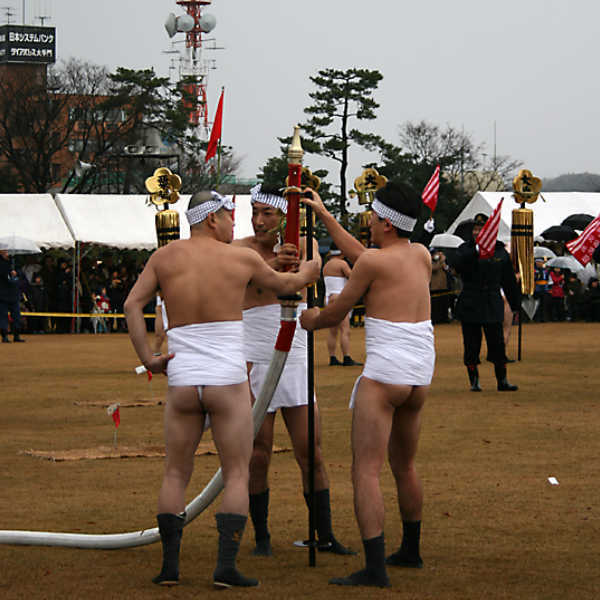 Launching water
up to the air

Each firefighter was wearing only a loincloth, a pair of Jika-Tabi (rubber-soled Japanese socks), and a headband! They must have been freezing!!! A few firefighters came out; holding onto one hose. They have to be strong, since it’s rare for the hoses to get loose due to the water pressure. Well… it’s show time!

It all starts with a warning in Japanese, something like “You may get wet!” Well, most of the people already had their umbrellas up because of the sleet. Then…the water from hoses launch up to the air, all at once! Wow! 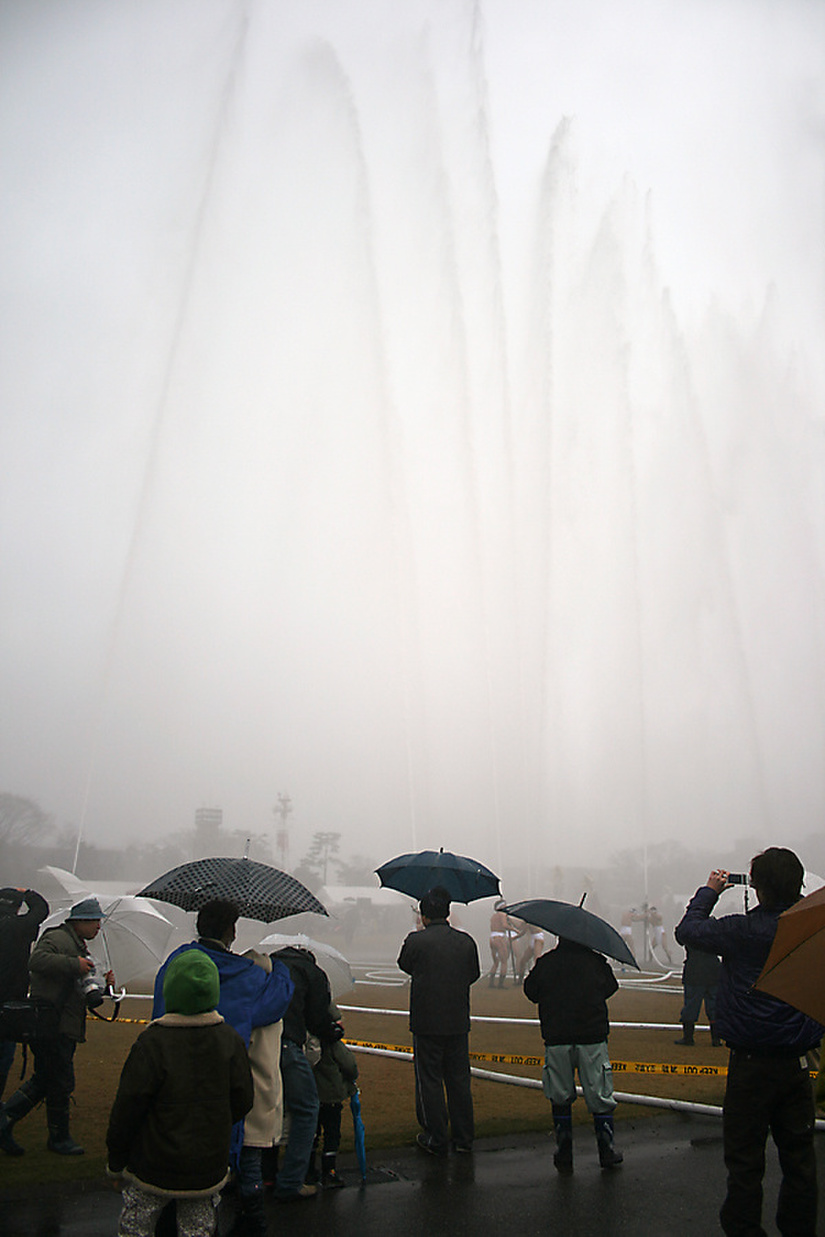 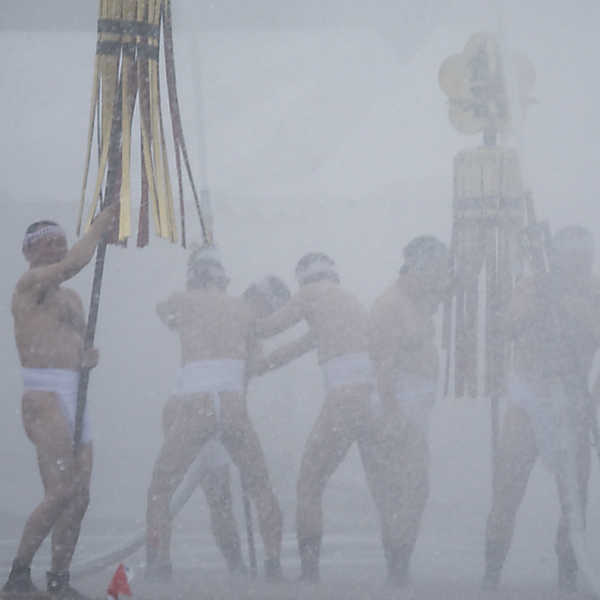 The water seemed to rise up more than 10 meters! I saw some people trying to avoid getting splashed, although the firefighters were totally soaked. These events are free to watch, so make sure to check out the castle park! If you missed the chance to observe this year’s performance, you can make plans to come and see it next year. They’ll be keeping up with their performances, hopefully forever!